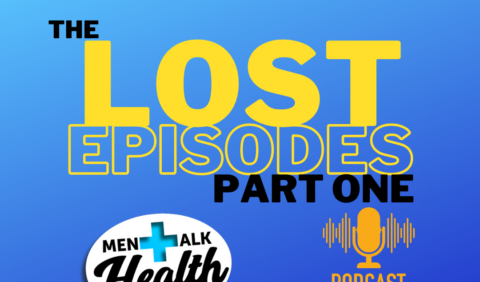 MenTalkHealth with Chris Grant from Parkour UK. (The Lost Episodes Part One)

Welcome to part one of the MenTalkHealth Lost Episodes! During the pandemic we were lucky enough to record two very special pod episodes! Now that we’ve managed to settle down from all things COVID-19, we’ve dusted off the files and here is part one for your entertainment. Joining us in the episode is Chris Grant from Parkour UK and a mental health advocate. Enjoy!

Episode 29: We Can’t Carry These Sins on our Back

It’s time to hear your mental health tales, especially in this Covid era. First up on the ‘all new’ MenTalkHealth Podcast (new voices and stories, same honesty and humour) is GScene columnist, Craig Hanlon-Smith. We talk Lockdown anxiety, therapist Tinder and Madonna lyrics for every occasion.

In 2016, Davey and Damian set out on a journey to help men open up about mental health by talking and laughing about their own. As MenTalkHealth grew, so did their resilience. Now it’s time for these best mates to say goodbye – as we hear from new guests with inspiring mental health stories to tell. 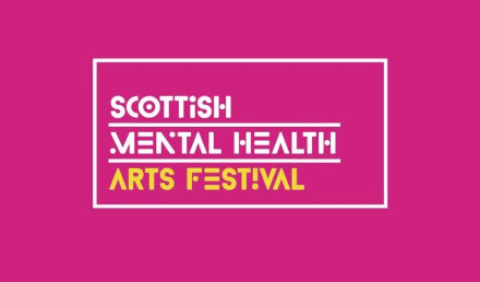 Davey meets Edinburgh artist Andrew Henderson to find out how his art sculptures speak to his relationship with mental illness, in our second episode from the SMHAF – the biggest arts festival of its kind in the world. Andrew’s work is part of the brilliant ‘All, Entire, Whole’ exhibition curated by our guest host, Sean McGugan.

Trigger warning: This episode talks around the subject of suicide in an important and healthy way. If this is a possible trigger, that’s okay. Join us on the next episode instead.

Davey is at the biggest arts festival of its kind in the world, meeting filmmaker and Grand Jury prize-winner, Tim Mercier, to talk about Model Childhood – his short film about his experience of childhood sexual trauma. Dealing with the legacy of a sexual assault, Davey, Tim and our guest host Sean, discuss creating a way to tell your story – no matter how hard it might be to tell – in the first of two special episodes from the SMHAF.

Trigger warning: This episode talks around the subject of sexual assault and suicide. If this is a possible trigger for you, that’s okay. Join us on the next episode instead. 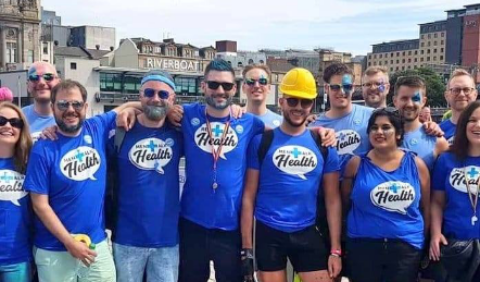 Looking after your mental health is a continuous effort. After a good run, both Davey and Damian find themselves battling setbacks in their own journeys. Fearful they are sliding backwards, they invite their friend, Chris, to talk with them. He helps them see how far they have all come since starting MenTalkHealth. Supportive talk soon turns to laughter and bad language as our boys take time to recognise their successes.

Davey and Damian take a trip down memory lane to get back to basics. When they started MenTalkHealth over two years ago, they would sit down over a drink and take time to really talk about their mental health. In this very special episode, our boys get a chance to laugh louder and longer as they take stock of just how far they have come on their mental health journeys. The conversation is real, rude and heartfelt, just like their friendship. 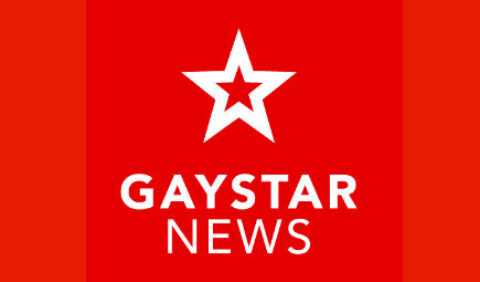 Our boys are joined by their friends Joe and Lewis from Gay Star News to mark Time to Talk Day, and share positive ways all four are battling their own demons. It’s been a while since Davey and Damian had a chance to check in and a lot has changed for both. But laughter soon flows as we learn more about the support of their partners, the language of Drag Race and the need for LGBTQ+ mental heath workers – and celebrate the simple benefits of talking. 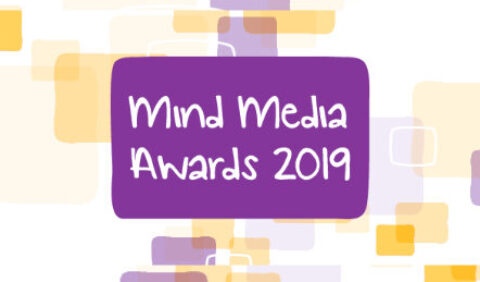 Episode 22: Davina, Will You Be My Friend?

With the Mind Media Awards bringing brilliant mental health campaigners together, Damian and Eli catch up with Liverpool comedian and Chasing the Stigma founder Jake Mills, who’s just won for his 24 hour Mental Health Marathon radio show. We also discuss the good, bad and ugly of being a ‘mental health’ guest for TV Production companies and tackle the often ignored topic of male sexual assault – giving a voice, love and support to one of our beloved team who is still coming to terms with his experience.

Following their nomination for The National Diversity Awards for their work with gender, Davey and Damian are joined by The Gender Games author Juno Dawson to reflect on society’s obsession with gender roles. With men being told to ‘Man up’, gay men to be more ‘Masc’ and boys fearful of being called ‘Girly’, we learn just why destructive ideas of gender roles damage everyone’s mental health – regardless of what we have between our legs. 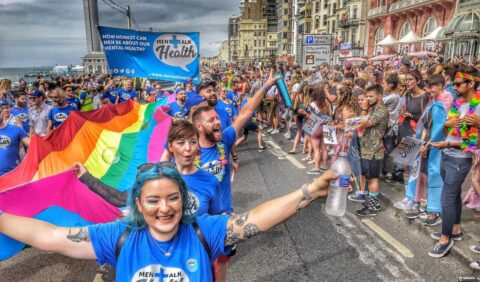 Episode 20: Anxious About Being Anxious

We laugh and talk about the challenges of relocating back home, as Davey and Eli both find themselves living back in Glasgow. With Damian off travelling the world, another Celt, Sean McGugan, steps in for a conversational odyssey that also takes in anxiety shakes, Damian’s Penis Monologues and a touch of IBS. Plus, we reflect on the impact MenTalkHealth has had since it started.

LGBTQ+ mental health service MindOut invited us to record this special episode with some of the people they’ve supported. Guest host Spice, and service users Kerri, Ben and Ed, share experiences and laughter, as we work together to improve the mental health and wellbeing of LGBTQ+ communities and make mental health a community concern. 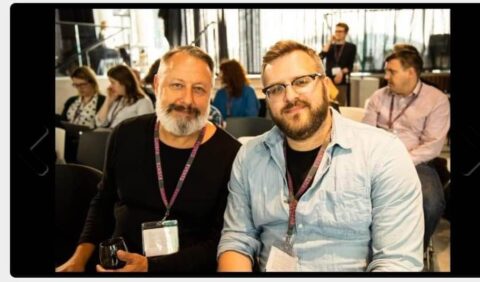 A mysterious lost episode has been unearthed and edited for your enjoyment! While trying to manage a cohesive conversation about mental health, Damian, Davey and Eli find themselves in fits of laughter and with more pressing things to discuss – like day trips to France, the life of Ghandi as an opera and past life regression. To celebrate Mental Health Awareness Week (MHAW), we present it as an example of how great talking can be. 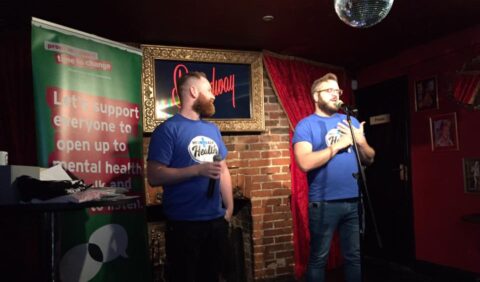 Episode 17: The Stranger in the Cubicle

Jonny Benjamin MBE, the amazing role model and mental health campaigner, drops in to share his experiences of living with Schizoaffective disorder and the voices inside his head. With no question out of bounds, or any joke too far over the line, serious talk turns to serious laughter as Davey, Damian and Eli show once again that it’s much better to be honest about our mental health.

Episode 16: Scrupulosity and The Recovering Misogynist

The subject of ‘toxic masculinity’ is on the cards as friend Matt shares a personal and inspiring story with Davey, Damian and Eli. In amongst the usual warm humour, it strikes an emotional chord with one of our boys – reminding us once again why it’s so important to talk before it’s too late.

Raucous mental health chat in front of a live audience this time, as Davey and Damian grab hold of some microphones, a bottle of champagne and ‘Drag Discombobulator’ extraordinaire Spice in the midst of our first fundraiser. Seasonal Affective Disorder (SAD), the pitfalls of ‘banter’ and where to buy your pants… We celebrate the continued success of MenTalkHealth by covering all the important topics. 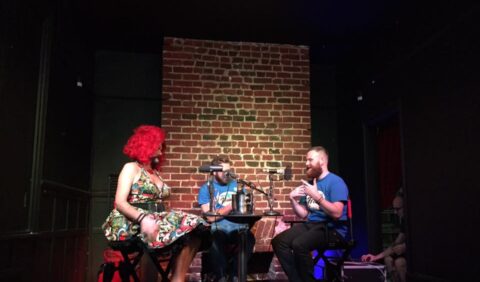 Neil Hilborn’s powerful and personal poetry about his own mental health has been viewed more than 70 million times online. We talk Tinder profiles and the true smell of hip hop – naturally – as he stops by on tour for a chat with Davey, Damian and Eli, sharing poems and experiences and marking World Mental Health Day.

Damian is running the 2017 Berlin Marathon in memory of his late brother, Patrick – and we’re there to cheer him through every step of the 26.2 miles. We follow Damian on his journey through this very personal challenge, and meet some other great runners with their own mental health stories to tell.

Responsive site designed and developed by