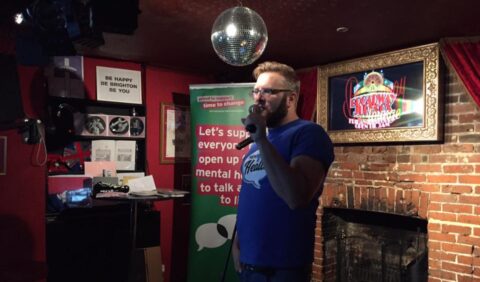 Episode 12: I Don’t Just Panic at the Disco

Eli decides to share her history of panic attacks, as we get to know more about the woman who has been guiding Damian and Davey through the perils of making this show. Eli has had her own mental health issues to deal with –and there’s lots of laughter and love in this episode as we find once again that talking really does help.

A raucous episode as Davey and Damian are joined by Trans friends Sugar and Sam, learning what it’s like to go through puberty as an adult and to be eight months pregnant for two years. Political correctness goes out the window in this final part of our special LGBTQ+ series for MHAW. 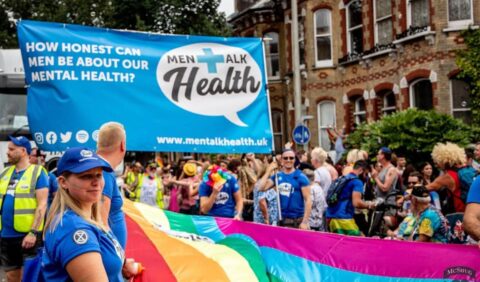 In a one-off MHAW special for their listeners away at university, Damian and Davey take a moment to reflect on the importance of supporting each other during what is a brilliant, bizarre and baffling time for anyone. How can we recognise when someone is struggling with their mental health and make sure everyone takes time to talk?

Sex talk is on the cards again as Steve and Alex, two guys living life with HIV, open up to Davey and Damian. It seems stigma and prejudice still pose a big mental health challenge – even from your own community. But there’s plenty of laughter and smutty talk along the way in this fourth part of a special LGBTQ+ series for MHAW.

We hear more about how the stigma of sexuality can lead to poor mental health, as Davey heads to Scotland. With the honesty of some new friends, he learns there are ways to fight back against your own thoughts, in this third part of a special LGBTQ+ series for MHAW.

The conversation turns to tits, and the MenTalkHealth team learn that you can inherit more from your parents than just the family home, as they’re joined by new friend and Lesbian-About-Town, Dom. More raw honesty and inappropriate laughter in this second part of a special LGBTQ+ series for MHAW.

Meet Tara and Tabitha, two strong women who don’t let labels or mental health stop them, as Davey, Damian and Eli hear stories of mental health from the LGBTQ+ community – and get a thorough schooling in what it is to be the ‘B’. Plus they talk Prozac, incorrect diagnoses and the ‘musical community’ in this first part of a special LGBTQ+ series for MHAW.

It’s been a tough time for Davey and Damian since the last episode. Both have had setbacks and struggles with their mental health. But as always they find a way to talk, share and laugh with their infectious honesty. Warning: there may be tears. 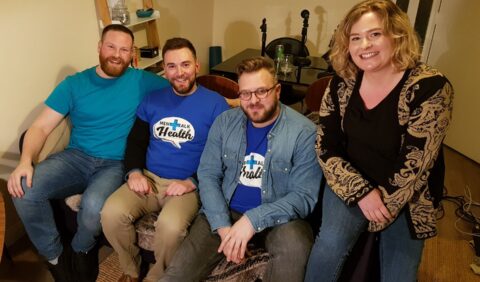 Damian and Davey open themselves up to a live Q&A from listeners in honour of the brilliant Time To Talk Day. We learn about Damian’s alter ego Sandra and discuss Davey’s anxieties about dressing up as Olivia Newton-John, as Eli keeps firing the mental health questions. 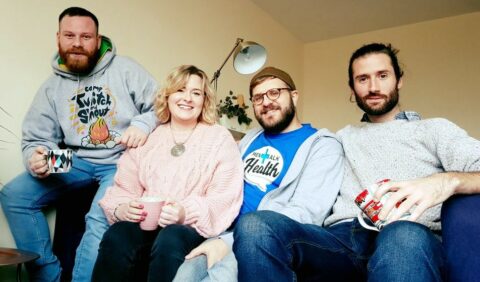 From Smurfs to tattoos to relationships, the conversation soon turns to comparing the wonderful physical side effects of meds – as Damian and Davey invite their friend Chris to share his own mental health story ahead of Time to Talk Day. 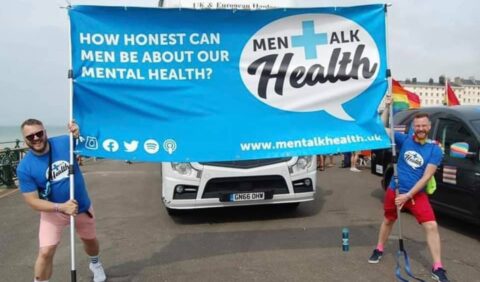 Episode 2: My Mental Health and The Monk

Having hopefully learned how to handle their wine since the first episode, Davey and Damian delve deeper into their mental health – with Damian talking about his Tourette’s and Obsessive–compulsive disorder

(OCD), including intrusive thoughts and the time he became obsessed with religion. The friends also listen, laugh and learn about different theories of mental health.

Episode 1: My Mental Health and Me, Myself & I

With too much wine and perhaps too much honesty, two men open up about their colourful history of mental health issues. We learn how Damian helped Davey find humour in his darkest moment – with the aid of their friend and ‘chief prober’, Eli.

Responsive site designed and developed by